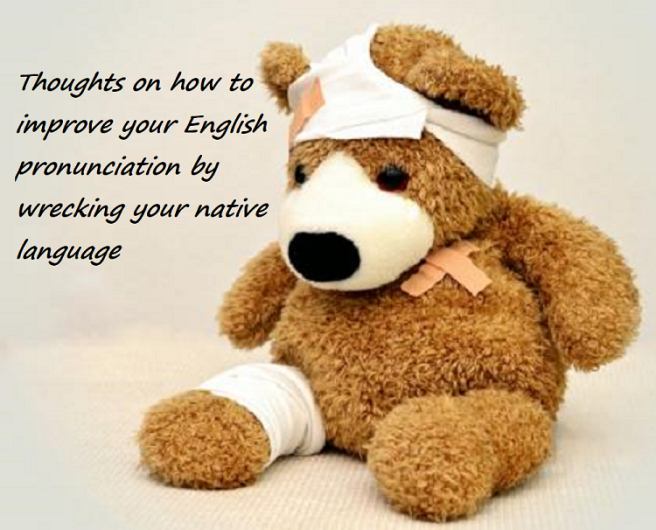 Okay, no misunderstandings here, please! I’m not talking about ridiculing languages that aren’t English. I’m talking about using them with a sense of humour to help you understand English pronunciation in a powerful way.

There’s a particular exercise that I love to do with my clients. At first they think I’m crazy. But then they begin to understand the purpose. Once they truly get into it, it’s ridiculously fun and very very enlightening.

I’ll begin by having them translate a simple sentence or two into their native language, be it Spanish, Polish, Arabic, French, Mandarin, whatever. It can be as simple as “My name is [XXX] and I’m studying English pronunciation. Then I’ll ask them to pretend they’re anglophones trying to learn this foreign language, but with no feeling for the language at all, none whatsoever!!! It sounds terrible – truly awful!! The English-speaker just can’t manage to imitate the accent: wrong sounds, wrong syllable stress, wrong word stress … wrong … wrong… wrong. But it’s so bad that it’s cute. It makes you laugh in a loving way. The idea is to be playful and outrageous, by really trying to capture the authentic sound of the English language transferred to your native language.

There’s no anger, no frustration – just lots of love and appreciation for this anglophone trying so hard and failing miserably.

Why do this exercise that seems so pointless and silly?

Simple –– the more you can “massacre” the accent of your native language with an English-speaker’s accent, the better you understand the essence of the Canadian accent (or standard North American accent, whatever you want to call it). Where does the tongue need to go? How wide does your mouth have to open? What’s the shape of your lips? How different is it from what you would automatically do?

It actually takes a lot of thought. It’s not so easy.

And you tend to want to speak quickly because it’s easier to slip back into the accent that comes naturally. But you’ve got to slow down – be deliberate. Pretend you’re that anglophone. Think of yourself in different clothes, maybe with a different hair colour. Anything – just pretend. Step into the shoes of this imaginary anglophone.

What makes it so difficult for them to adapt to your accent? Insert the sounds that don’t exist in your native language: for example, that pointed vowel /a/ as is black (/æ/); that rhotic /r/ back in the throat with the tip of your tongue down, pulling back and up. Think of the vowels and consonants that have been especially difficult for you to correct in English and use them to replace the consonants and vowels in your language. You want to make your own language sound as terrible as you can.

You’re really being two people: the anglophone who’s wrecking the sound of your native language and the native speaker who’s listening with amusement (if not outright laughter) at just how far from authentic it sounds.

You’re putting yourself inside the body and the mind of the English speaker trying to speak your language. So really exaggerate the differences. Don’t be afraid to make it totally absurd. How does their foreign accent sound in your native language? How do their sounds feel inside your mouth?

Have you, the speaker of ESL, or your clients/students (if you’re a coach or a teacher) ever tried it? If you’ve done it or used it, tell me how it worked. What sentences did you use?

And don’t forget to check out the latest word-of-the week at One-Minute Words on The Canadian Pronunciation Coach YouTube channel.

Published by The Canadian Pronunciation Coach

I love to coach speaking skills to advanced speakers of English as a Second Language and as a Common Language. And more and more, I'm being approached to coach public speaking to native English speakers. I love the energy of sharing, the beauty of making the connection between music and language, the excitement of watching my clients become persuasive speakers. But being passionate about my work also means that my mind is always busy with thoughts and questions about best practices for coaching pronunciation, new ideas for and about coaching public speaking, how to reconcile what we teach with how we native speakers sometimes talk, how language changes and evolves, the role of accent management in this multicultural world, the simple challenges of becoming a confident speaker. View all posts by The Canadian Pronunciation Coach